BEVs began entering the market with the introduction of Mitsubishi i-MiEV in 2009. The Nissan Leaf soon followed, currently one of the most prominent BEVs in the world, in 2010.
In 2010 when sales of Nissan Leaf first began, the driving range per charge was at 200km. After 7 years, the range doubled to 400km, after the battery capacity improved.

※Specifications/price based on when commercial sales first began

A new vehicle that solves the issue with driving range per charge of BEVs and combines the best features of both BEVs and HEVs entered the market in the 2012 ‒ the PHEV.
During short distance driving, PHEVs use the electric charge taken from an external charger in the same way BEVs do, and during long distance driving, it switches to HEV using gas. The specifications for PHEVs chosen as examples, are shown below.
The battery capacity PHEVs also seems to be on the rise as well. Driving range as a BEV is currently at approximately over 60km, meaning the vehicle can be driven purely as a BEV for daily use.

In 2014, Toyota MIRAI was introduced to the market as the first commercial model FCEV. Honda soon followed suit with its very own CLARITY FUEL CELL, made available for leasing in 2016.
Hydrogen, the fuel, is packed into 70MPa pressurized hydrogen tanks. The driving range is over 600km, only requiring 3 min. to fill the tank, making the usability comparable to that of gasoline-powered vehicles.

The graph below shoes the transition in the total number of BEVs and PHEVS sold in Japan after 2009. The number has reached over 200,000 vehicles, and is steadily growing.

Accumulated total no. of BEV/PHEV sold in Japan （since 2009） 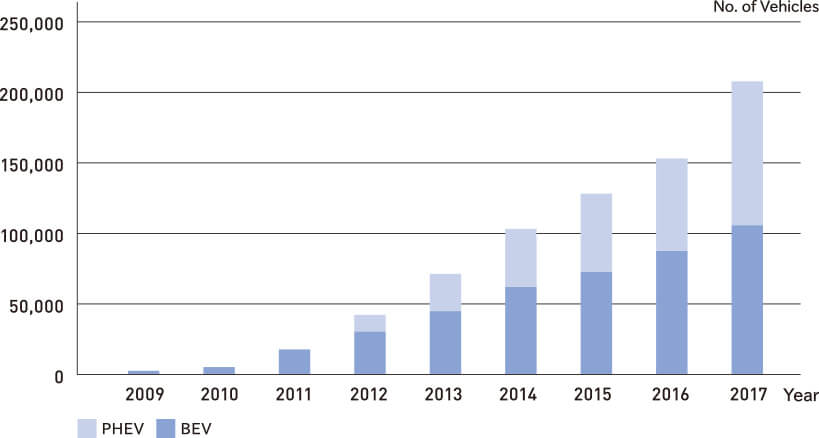